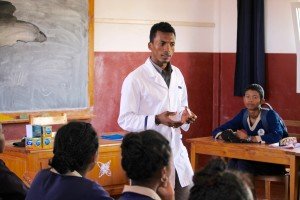 I have made my poverty a weapon of success”

Mandimby joined the CERES program when it was launched in 2008. From the 1st year to the final year, the program’s personal and global support allowed him to successfully overcome various difficulties despite moments of doubt. Now, Mandimby wants to offer young people in difficulty the same chance as he had. In order to become a good teacher, he followed the Initial Teacher Training (FIP) set up by the same CERES program since 2014.

For the past 11 years, the IECD and the Madagascan association PROMES have been combating school failure among young rural students in the region of Fianarantsoa by supporting them from junior school through to higher education (bachelor’s degree level). The global support offered to them, through remediation education, extracurricular educational activities, reception in boarding facilities and personalized monitoring, allows them to flourish on a personal, intellectual and educational level in an environment that is favorable to learning. Thus, since the start of the project, almost 9,000 students have been supported in the frame of the CERES program with very positive results: 83% success rate in the BEPC mid-school exam (2016-2017) and 86% success rate in the Baccalaureate (2016-2017) for students followed by the CERES, namely more than twice the national success rate. This success is partly due to the holistic approach of the program which takes account of the student and his or her environment.

The CERES program has evolved throughout its 10 years of existence, in particular with the introduction in 2009 of a so-called ″Preparatory Year″ between the moment students obtain the BEPC mid-school exam and their entry into reputable high schools in Fianarantsoa, which used to be very difficult for young people from rural areas to access: thus, in 2016, 100% of the hundred or so students which benefited from the Preparatory Year were admitted to the six best high schools in Fianarantsoa. Since 2010, success rates in the Baccalaureate have continued to rise to reach 85% in 2016 (namely more than twice the regional level), thanks, in particular, to the setting up of the personalized monitoring of high school students. In 2016, 362 high school students benefited from this support. Finally, since 2013, the development of a post Baccalaureate solution with SUP-CERES and SESAME, has helped to support bachelor degree students in their higher education and their professional integration. SUP CERES is a hybrid local solution involving the monitoring of high school students and SESAME and concerned 39 students in 2016.

The student’s educational and family context is another concern of the CERES programs. With a view to educational coherence, information for parents (three meetings in 2016) and the training of teachers from 12 partner establishments (150 teachers participated in 10 days of training) are considered to be essential for the success of the mission.

2016 saw the creation of two independent associations which benefit from technical support by CERES and which are officially recognized:

MOST JUNIOR SCHOOLS IN THE BUSH DO NOT HAVE CERTIFIED TEACHERS

In Madagascar, most teachers in junior schools in the bush do not have special training. In order to remedy this situation, the Madagascan Education Ministry called upon the IECD’s know-how in educational engineering to create the Initial Teacher Training (ITT) course in 2014. In 2017, three academic years benefited from the FIP. Among the 36 students trained, more than 90% were certified by the National Institute for Vocational Training.