The Mediterranean basin is a strategic one for the IECD (almost one third of the operating budget in 2016) and it has had a strong presence there since 1989. Through its programs focused on the training and the access to employment of young people, as well as support to small entrepreneurs, the IECD contributes at its own level to better social cohesion and helps to maintain the program by positioning itself as a vector for peace. In this area, the IECD also implements actions to allow vulnerable people, in particular children from Syrian refugee families and children with special needs, to benefit from access to education and healthcare. The delegation created in Lebanon in 2007 helps to ensure its influence throughout the region thanks to the people deployed in the field who implement projects alongside their local partners.

The activities deployed in the region represent 38% of the IECD’s total activity. Several programs initiated in Lebanon are now extended to the rest of the world, such as the Seeds of Hope program. Today, the tensions in the region are forcing us to double our efforts and move up a gear. This is the case of the MLL project financed by the AFD. In Syria, in view of the situation faced by the population since 2011, the IECD is increasing its impact by strengthening the capacities of many local players. In the Palestinian Territories, the educational center in Bethany continues to develop its activities at the service of the most deprived children. In Egypt, the Seeds of Hope program continues its expansion with four partner schools in Cairo and Alexandria. In Morocco, thanks to its local partnerships, the IECD is offering a response to the youth unemployment situation which is almost 40% in urban environments. Finally, in order to fight youth unemployment in the Mediterranean basin, the MedNC project aims to coordinate and develop a network of effective partners. 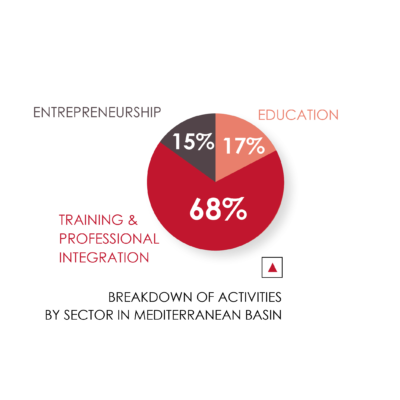