Madagascar is a major country for the IECD, which has implemented emblematic projects there since 1989 and focused almost 18% of its global actions: for 10 years, it has been developing responses to the educational needs of children and young people from the rural high plateaus of Fianarantsoa with the CERES program, which supports children from junior school through to the Baccalaureate, and the ″La Rizière″ hospitality school. Created in 2013, the SESAME program in Tananarive, has allowed motivated and deserving young people to to continue their higher education in the capital, with the help of a complete program based on the model of the CERES program. The initial teacher training (FIP), which partly compensates for the lack of teachers and the lack of training that was identified by the World Bank. The IECD also supports the Ministry of Employment, Technical Education and Vocational Training in its policy.

In parallel, and in order to help small entrepreneurs to escape the spiral of insecurity, since 2013, the IECD has deployed its Support to Small Enterprises program with its partner MED.

Finally, Madagascar is a country greatly affected by the first genetic disease in the world: sickle-cell disease. Since 2014, in partnership with the patients’ association LCDM and the HJRA university hospital, the IECD has adapted its program to improve care for people suffering from sicklecell disease. In 2016, it was extended to four additional towns, in particular on the east coast of the island, where there is a higher occurrence of the disease. In 2017, 1,700 people were treated, and 8,700 people were screened.

A module on the fight against sexual tourism involving children was created and tested at La Rizière hospitality school in Fianarantsoa.

Madagascar Entreprise Développement (MED) performs its first lucrative training (Top Sales and Top Départ) and coaching services on a significant scale with a view to making the model viable. 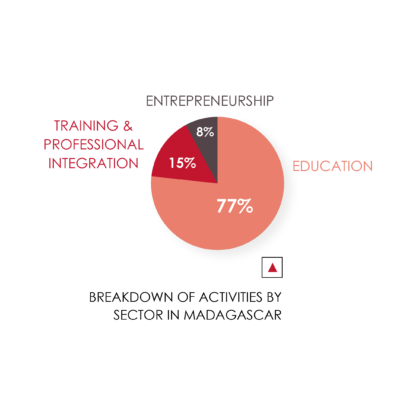